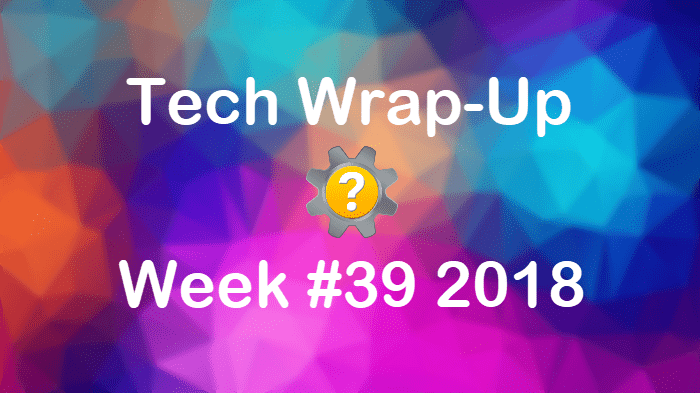 Tech Wrap-Up Week 39 2018. A look back at this week’s most engaging stories from the Tech Help Knowledgebase social media feeds. We order the story summaries below by user engagement (posts with the most likes, shares, clicks, hashtag clicks and detail expands) and by the number of impressions they received. Stories are in descending order with the most engaging story at the top. Our human-curated social media feeds include links to technology news, how-to and help articles, and video tutorials for common issues.

Google Lens already includes similar functionality. A Pixel 3 promotional video, however, appears to show it working in a different way. Instead of taking a photo first then opening the email app, the camera scans the business card without taking a photo at all. The big question is does Google have any surprises left to deliver at its upcoming October 9 event?

Jack Poulson, a former Google research scientist, and former Stanford University math professor, quit his Google job over Project Dragonfly. Dragonfly is Google’s reported effort to build a censored search engine for China. Poulson submitted an open letter to American lawmakers calling for increased oversight, accountability, and transparency in the technology industry in the wake of Dragonfly coming to light.

Vivaldi browser 2.0 has more than 1500 fixes and improvements. Some of the 2.0 highlights are a fresh look to the interface, Vivaldi Sync between computers with end-to-end encryption, powerful tab management adding the ability to resize tabs in split-screen, and smarter browsing with floating panels. Check out the full changelog from version 1.15 to 2.0.

5. MacOS Mojave 10.14 has arrived: How to download, best new features and more (CNet)

Available today as a free upgrade to macOS users is macOS Mojave, which is version 10.14. Download macOS Mojave from the Mac App Store. Look at the top of the App Store window for the new version, then click the Update button. CNet lists some of the best new features as Dark mode, familiar iOS apps available on macOS, Group FaceTime, and Stacks.

Some early sales information about the new iPhone XS models shows the larger iPhone XS Max outselling its smaller counterpart. The information, according to Apple analyst, Ming-Chi Kuo, tells us the 256GB version is the preferred Max model too. Demand, which may be better than anticipated, may leave users who want the iPhone XS Max waiting for their new phones a while longer. Kuo ultimately believes the iPhone XR, available for pre-order on October 19, will draw even more upgrades than the XS’s.

Brave released its first browser back in January 2016, so the path has been a long one to the upcoming 1.0 release. The beta 1.0 version includes new features like Private Browsing with Tor support, Widevine support on Windows and macOS (with Linux in the pipeline), and some UI and design changes to further distinguish Brave from Chromium. Also mentioned is WebTorrent support, and a replacement for the existing Brave Payments feature.

A newly discovered Firefox bug may crash the browser, or even freeze Windows, Mac, and Linux computers. Frozen computers require a hard reboot. The exploit does not impact iOS and Android versions of Firefox. Firefox added the bug to Bugzilla, its tracking list, but hasn’t released a fix for it yet.

Tor Browser is all about surfing the internet anonymously and privately. The Tor Browser 8.0.1 update is based on several security updates to Firefox categorized as “low” or “moderate.”

10. About the security content of macOS Mojave 10.14 (Apple Support)

Thank you for visiting Tech Help Knowledgebase to read the Tech Wrap-Up Week 39 2018. If you liked this article, follow us on Twitter @techhelpkb and subscribe to our YouTube channel to keep in the loop.