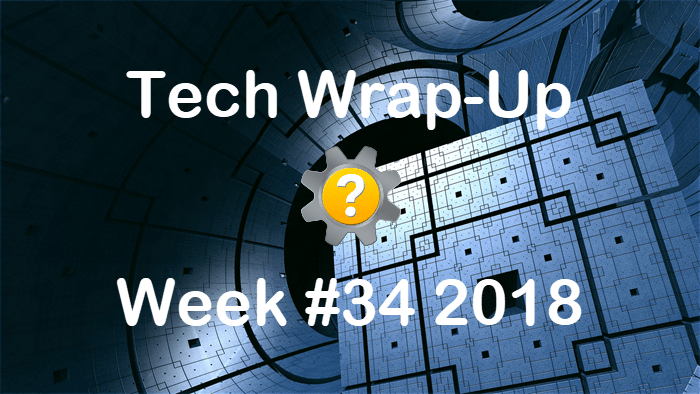 Tech Wrap-Up Week 34 2018. A look back at this week’s most engaging stories from the Tech Help Knowledgebase social media feeds. We order the story summaries below by user engagement (posts with the most likes, shares, clicks, and detail expands) and by the number of impressions they received. Stories are in descending order with the most engaging story at the top. Our human-curated social media feeds include links to technology news, how-to and help articles, and video tutorials for common issues.

A Windows Defender update borked Honeyminer, a cryptomining app that turns altcoins into Bitcoin (BTC). Developers of the Honeyminer app released an update this week to resolve the issue. Users should toggle Honeyminer on/off switch to implement the update and get back to mining.

2. Revolut Metal card from RevolutApp now offers cash back on spending in cryptocurrencies like Bitcoin (TechCrunch)

Metal? Yes, real metal. Revolut Metal is a new premium card offering from Revolut. The contactless steel card earns you up to 1% cash back on your purchases. Revolut pays out cashback in numerous fiat currencies, or in Bitcoin, Litecoin or Ether. Revolut restricts the Metal card to its Premium members, at least for the time being.

Google is testing support for Linux apps on Chrome OS devices like Chromebooks. A caveat is that only a limited quantity of Chromebooks will support them, at least initially. According to the Chrome Enterprise release notes, “Linux (Beta) for Chromebooks allows developers to use editors and command-line tools by adding support for Linux on a Chrome device. After developers complete the set up, they’ll see a terminal in the Chrome launcher. Developers can use the terminal to install apps or packages, and the apps will be securely sandboxed inside a virtual machine.” September 4, 2018, is the targeted stable channel release date for Chrome 69.

The cat’s out of the bag…again. More leaks about Google’s Pixel 3 XL smartphone made there way to the public. Included is a video depicting the device wirelessly charging.

5. Microsoft says it has delivered on its plan to bring Skype for Business features to Teams (ZDNet)

Microsoft proclaimed this week that they completed the migration of Skype for Business into the Teams group chat platform. Teams now includes boss and delegate support, call queues, auto attendant, and other features to round out the offering. 200,000 organizations are using Teams.

It seems like anyone’s guess if IoT devices for homes or businesses are secure. Foundries created an open source solution for both updating and securing your things. The over-the-air mechanism allows manufacturers to push out updates automatically.

7. The easy way to use Windows on a Mac just got better (Computerworld)

Parallels released version 14 of Parallels Desktop, the applications that lets you run Windows on your Mac. It is even compatible with macOS 10.14 Mojave, due for release this fall. The article drills into the storage, performance, and other improvements users can expect from this update.

Up, down. Left, right. Yin, yang. Do, undo. The Undo Send feature included with the web version of Gmail is available to Gmail for Android users. If you change your mind about a sent email or its contents, undo the sending of it within 10 seconds. No one will ever know but you.

10. Steam Play update breaks more games out of Windows and onto Linux (The Inquirer)

Thanks in part to a compatibility tool called Proton, and the Vulkan API, Steam users can run more games on their Linux and Mac machines.

Thank you for visiting Tech Help Knowledgebase to read the Tech Wrap-Up Week 34 2018. If you liked this article, follow us on Twitter @techhelpkb and subscribe to our YouTube channel to keep in the loop.