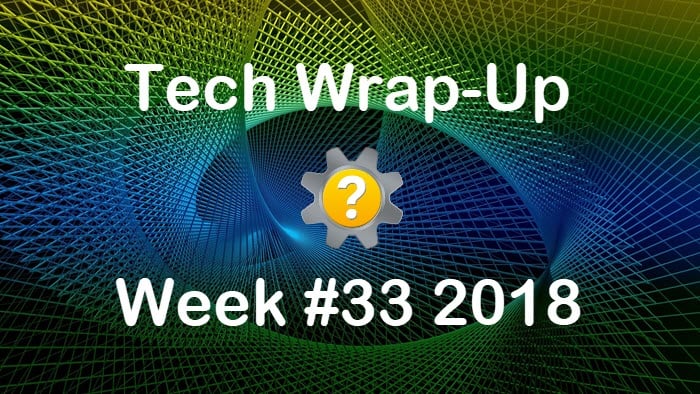 Tech Wrap-Up Week 33 2018. A look back at this week’s most engaging stories from the Tech Help Knowledgebase social media feeds. We order story summaries by user engagement (posts with the most likes, shares, and clicks) and by the number of impressions they received. Our human-curated social media feeds include links to technology news, how-to and help articles, and video tutorials for common issues.

Recently open only to beta testers, the new Google One service is open to everyone. All Google accounts get 15 GB of storage for free. Google One offers paid tiers starting at 100 GB for $2 per month, all the way up to a 30 TB plan. Paid plans include access to Google experts, option to add your family, and extra member benefits.

2. Twitter shutters legacy APIs and borks third-party apps in the process  (The Inquirer)

Leaning on warnings it gave back in 2011 and 2012, Twitter made good on its promise to limit the use of its legacy API. Some third-party apps experienced reduced functionality or stopped working altogether.

3. New ransomware arrives with a hidden feature that hints at more sophisticated attacks to come (ZDNet)

The KeyPass ransomware began its spread on August 8, and impacts users in over 20 countries. The ransomware reportedly includes an option that allows an attacker to take manual control of the infected system.

This post from the Google Security Blog marks the 8th anniversary of Google Public DNS availability. According to the article, “10% of internet users rely on 8.8.8.8, and it serves well over a trillion queries per day.” Thank you for making the internet faster.

Adobe released an in-cycle patch for Flash Player on Patch Tuesday this week. Adobe did not designate any of the patched vulnerabilities as Critical this month, but they were marked as Important. Update to Flash Player 30.0.0.154 to patch your flatch.

Chrome OS 68 launched on August 7, but has since been pulled. The update included some improved accessibility features, a new Display Size setting, marking non-HTTPS sites as “not secure,” and more. Some customers reported issues with Wi-Fi connections after updating their systems, specifically related to 802.11r support. Downgrading to Chrome OS 67 resolves the issue.

7. How to backup your computer to the cloud with OneDrive folder protection (BetaNews)

OneDrive folder protection used to be reserved for OneDrive for Business subscribers. Not anymore. Now everyone can automatically sync their documents, pictures and desktop folders to Microsoft’s cloud service.

In December 2017, an international consortium of law enforcement agencies took down the Andromeda botnet. The article suggests “organizations need to be more proactive with their security procedures” to improve identification and cleanup processes.

A presentation at the recent Def Con hacker convention exposed a method that can bypass macOS security with a “synthetic click.” An attacker could use the bypass to access geolocation, contacts and calendar information.

10. Browser mining is generating over $250K worth of cryptocurrency every month  (The Next Web)

CoinHive is mining $250,000 worth of Monero each month. Proceeds from the mining effort appear to flow to fewer than a dozen people. The article suggests protecting yourself from cryptomining with a browser extension called minerBlock.

Thank you for visiting Tech Help Knowledgebase to read the Tech Wrap-Up Week 33 2018. If you liked this article, follow us on Twitter @techhelpkb and subscribe to our YouTube channel to keep in the loop.