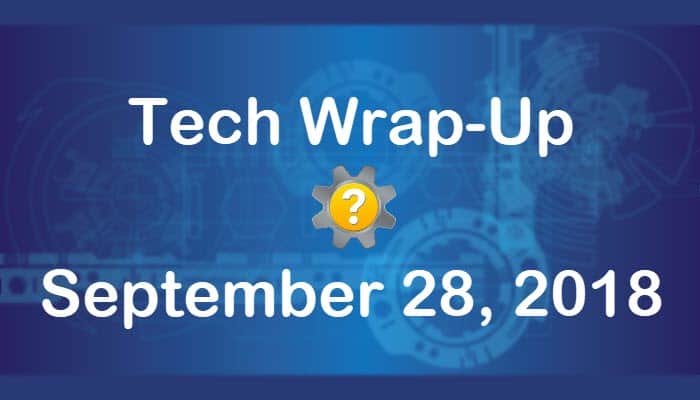 Tech Wrap-Up 9-28-2018. Wrapping up the day with a summary of today’s most engaging stories from the Tech Help Knowledgebase social media feeds. We order the story summaries below by user engagement (posts with the most likes, shares, clicks, hashtag clicks and detail expands) and by the number of impressions they received. Stories are in descending order with the most engaging story at the top. Our human-curated social media feeds include links to technology news, how-to and help articles, and video tutorials for common issues.

Google Lens already includes similar functionality. A Pixel 3 promotional video, however, appears to show it working in a different way. Instead of taking a photo first then opening the email app, the camera scans the business card without taking a photo at all. The big question is does Google have any surprises left to deliver at its upcoming October 9 event?

Brave released its first browser back in January 2016, so the path has been a long one to the upcoming 1.0 release. The beta 1.0 version includes new features like Private Browsing with Tor support, Widevine support on Windows and macOS (with Linux in the pipeline), and some UI and design changes to further distinguish Brave from Chromium. Also mentioned is WebTorrent support, and a replacement for the existing Brave Payments feature.

Vivaldi browser 2.0 has more than 1500 fixes and improvements. Some of the 2.0 highlights are a fresh look to the interface, Vivaldi Sync between computers with end-to-end encryption, powerful tab management adding the ability to resize tabs in split-screen, and smarter browsing with floating panels. Check out the full changelog from version 1.15 to 2.0.

4. The best antivirus is not traditional antivirus (Engadget)

Engadget’s antivirus piece contains some unexpected information. For example, it says they learned that most people shouldn’t pay for traditional antivirus software or use free versions either. For most Windows users, Windows Defender provides adequate protection, especially when coupled with the premium version of Malwarebytes and good habits. Good habits include strong passwords, 2FA, data encryption, and using privacy tools with your web browser.

There is increasing use of fileless malware. Microsoft detected two instances of fileless malware that “run in memory without an executable file being written to disk.” The instances may have been a penetration test rather than an actual attack. Test or not, the malware bypassed Windows Defender Advanced Threat Protection.

Java 11 is Oracle’s second major Java release of 2018. Oracle plans to support Java 11 for up to eight years (until 2026). The first new feature referenced in eWeek’s article is JEP 332, which adds TLS 1.3 to Java. Java 11 includes other security improvements like new cryptographic algorithms. Look for Java 12 in March 2019.

Matthew Green, a professor at Johns Hopkins University and a well-known cryptographer and privacy expert, switched from Chrome to Firefox in the wake of Google’s auto log-in debacle. Chrome 70 will include the option to disable the connection between Chrome and other Google services. But it’s too little, too late, for Matthew Green.