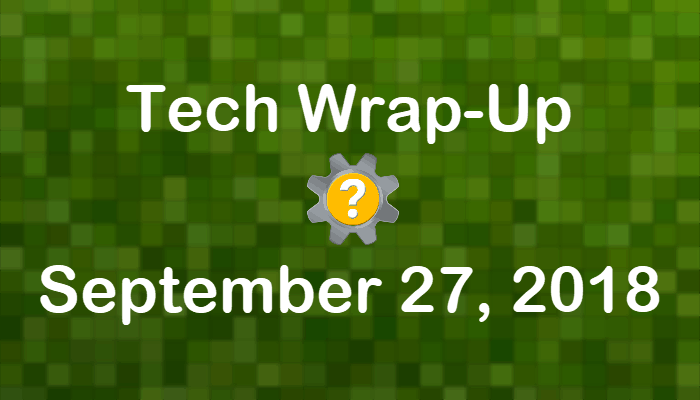 Tech Wrap-Up 9-27-2018. Wrapping up the day with a summary of today’s most engaging stories from the Tech Help Knowledgebase social media feeds. We order the story summaries below by user engagement (posts with the most likes, shares, clicks, hashtag clicks and detail expands) and by the number of impressions they received. Stories are in descending order with the most engaging story at the top. Our human-curated social media feeds include links to technology news, how-to and help articles, and video tutorials for common issues.

For the fourth time in 15 days, Microsoft released a cumulative update for Windows 10 version 1803. Even though updates have come fast and furious recently, this update includes significant fixes. For example, the update fixes fingerprint sensor issues, boot issues, issues with Windows 10 S, and an issue preventing developer debugging of minimized UWP applications. Check out the KB4458469 release notes for details.

YouTube did not have high dynamic range (HDR) available for the iPhone XS / XS Max launch day last week. Fortunately, it took less than a week for them to add it. But because Apple does not support the VP9 codec, the best possible resolution for Apple devices on YouTube is 1080p.

Mac Observer calls macOS Mojave “the most interesting, capable and stable release in years.” Their review covers which Macs support Mojave, and the features for which they have the most enthusiasm. Among them are Dark Mode, new Finder functionality, iOS apps, and more.

5. Consumer Reports gives back its recommendation to Microsoft’s Surface laptops (The Verge)

Due to reliability concerns in 2017, Consumer Reports yanked its “recommended” badge from Surface laptops. It turned out that 25% of Surface owners experienced some issues. Because Microsoft’s line of laptops now matches the reliability of other brands, Consumer Reports changed its mind. Surface Pro, Surface Laptop, and Surface Book 2 are all recommended now.

6. WLinux brings a custom Windows Subsystem for Linux experience to the Microsoft Store (The Register)

Windows Subsystem for Linux is an interface that allows Linux binaries to run on Windows 10 (and Windows Server 2019). Now available in the Microsoft Store is a custom distribution — Debian-based WLinux. Removed from WLinux for improved stability and security are unneeded packages like systemd, but git and neovim are pre-installed.

This week confusion reigned about a change Google made to Chrome’s login behavior. Users who logged into Gmail automatically logged into Chrome too. The fear was that users also logged into Google Sync, which uploads browser history, bookmarks, passwords, and more. Although Google was quick to say that Sync was still an opt-in feature, a method to disable this auto-login arrives next month with Chrome 70.