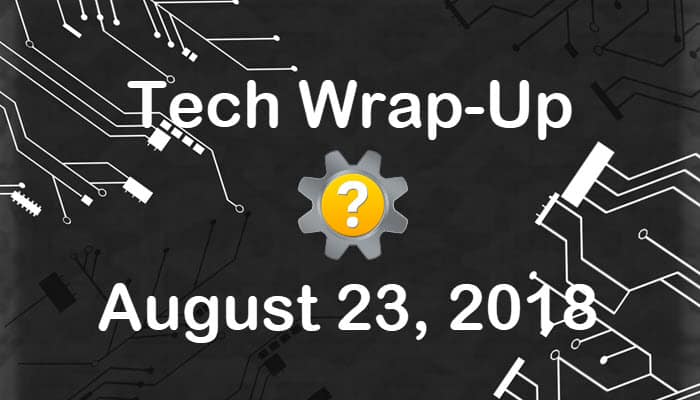 Tech Wrap-Up 8-23-2018. Wrapping up the day with a summary of today’s most engaging stories from the Tech Help Knowledgebase social media feeds. We order the story summaries below by user engagement (posts with the most likes, shares, clicks, and detail expands) and by the number of impressions they received. Stories are in descending order with the most engaging story at the top. Our human-curated social media feeds include links to technology news, how-to and help articles, and video tutorials for common issues.

Google is testing support for Linux apps on Chrome OS devices like Chromebooks. A caveat is that only a limited quantity of Chromebooks will support them, at least initially. According to the Chrome Enterprise release notes, “Linux (Beta) for Chromebooks allows developers to use editors and command-line tools by adding support for Linux on a Chrome device. After developers complete the set up, they’ll see a terminal in the Chrome launcher. Developers can use the terminal to install apps or packages, and the apps will be securely sandboxed inside a virtual machine.” September 4, 2018, is the targeted stable channel release date for Chrome 69.

2. Refresh Windows 10 to its default state in a few clicks, keeping your files and settings (TechSpot)

Windows 10 includes a handy Reset the PC option to help users with systems that don’t run well. If bloatware, malware or general sluggishness plague your system, resetting it could help. This feature reinstalls Windows 10, but lets you keep your files.

4. 7 Ways to Get Your Computer Screen Up on Your TV (Gizmodo)

Screencast your computer or other devices on your television. The article lists some of the key dongles and other methods that make the magic happen. 7 to be exact. One of the 7 ways is to simply connect your computer or laptop to your TV using an HDMI cable. Read the article for the other six.

5. How technology is changing the way we work (BetaNews)

It’s no surprise that users engaged with this article on the impact tech is having on our work lives. This piece touches on work-related travel, email, virtual assistants — unified communications technologies that serve as the basis for success. It touches everyone.

7. Chrome’s anonymous browsing feature isn’t as secret as we assumed (The Inquirer)

Google evidently has the ability to retroactively identify users who use an incognito window to surf. The culprit may be cookies stored in and out of incognito mode, allowing Google to connect the dots to a user if they so choose. Google disagrees.