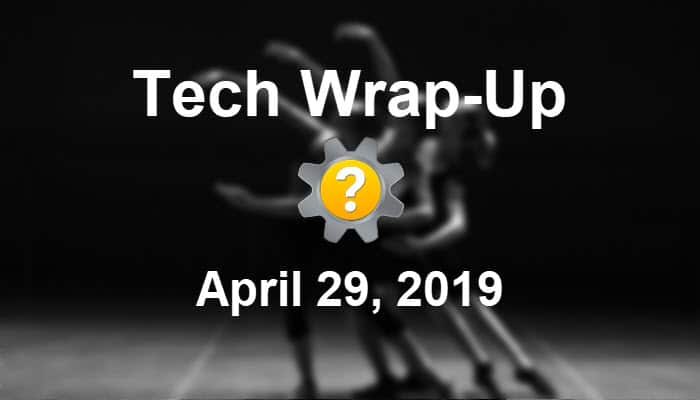 Tech Wrap-Up 4-29-2019. If you think you can dance, then dance while you think. Today is International Dance Day. According to New Scientist, not only does your mood improve when you dance, so does your ability to problem-solve. Tech Help Knowledgebase wraps up each day with a summary of today’s most engaging stories from our social media feeds. We order the story summaries below by user engagement (posts with the most likes, shares, clicks, hashtag clicks and detail expands) and by the number of impressions they received. Stories are in descending order with the most engaging story at the top. Our human-curated social media feeds include links to technology news, how-to and help articles, and video tutorials for common issues.

Stories curated for our feeds are from our staff writers or culled from third-party sources that produce content related to the categories covered by our site. See the summaries and links below for today’s top stories by user engagement. Follow us on Twitter, Facebook, Instagram, andYouTube to interact with our feeds.

All fingers appear to be pointing toward TypeScript becoming an essential language for developers, according to a report from RedMonk. Released by Microsoft in 2012 as an open-source rendition of JavaScript, TypeScript now ranks as the top programming language today. Further, JavaScript developers reportedly show increasing concern about the security of open-source code.

First, it is important for users to realize that the exploit is only a proof of concept found by developer James Fisher. The exploit displays a fake address bar when a user scrolls down, and it won’t disappear until the user visits another site. Google did not comment on the exploit, but 9to5Google says the real address bar displays when users lock then unlock the device.

3. How to combat the threat of Android malware (Popular Science)

Popular Science spoke with AV-Comparatives about their recent report concerning Android antivirus testing to see what works and what doesn’t work. AV-Comparartives’ CEO Andreas Clementi says the risk of malware is less in stores like Google Play versus in Asia where there are a larger number of third-party stores. Antivirus apps made by trusted security companies tended to be the best at detection. The conclusion is to try and minimize your exposure to malware sources using common sense and good security practices.

4. E*Trade may offer trading for Bitcoin and Ethereum (Engadget)

Word from a source at Bloomberg is that E*Trade is working on a cryptocurrency trading platform. The two assets with the largest market caps, Bitcoin and Ethereum, will begin trading first. Such a platform may serve to add further crypto legitimacy to mainstream investors and stabilize crypto markets.

A development branch of Chrome OS, Chrome OS 76, now offers VPN support for Linux apps under whichever VPN is running. The same issues encountered in providing support also held true for Android apps running on Chrome OS in the past.

The New York Times recently reported that Apple pulled or restricted 11 of 17 top third-party screen-time apps from the App Store during the past year. Apple retorted this past Sunday that the action was warranted due to privacy and security concerns, citing MDM software use that violated the App Store’s policies. Apple designed its own Screen Time app to help curb screen time and smartphone addiction among children.