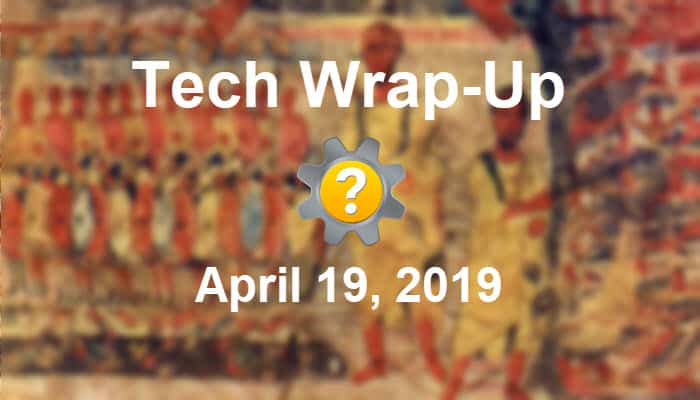 Tech Wrap-Up 4-19-2019. Passover begins today (the 15th day of Nisan) at sunset and continues for eight days. Jewish people around the world celebrate Passover to commemorate their liberation from Egyptian slavery by Moses. Happy Passover! Tech Help Knowledgebase wraps up each day with a summary of today’s most engaging stories from our social media feeds. We order the story summaries below by user engagement (posts with the most likes, shares, clicks, hashtag clicks and detail expands) and by the number of impressions they received. Stories are in descending order with the most engaging story at the top. Our human-curated social media feeds include links to technology news, how-to and help articles, and video tutorials for common issues.

1. The first DDoS attack was 20 years ago. This is what we’ve learned since (MIT Technology Review)

The world’s first known DDoS attack occurred on July 22, 1999. A script called Trin00 infected 114 other computers. Together they attacked a computer at the University of Minnesota preventing it from handling legitimate requests for two days. It’s hard to defend against DDoS attacks because it requires multiple operators working in concert.

Thanks to machine learning, independent game developers improve classic video games in a few short weeks. Developers use programs like ESRGAN to retexture old games into 4K. Such techniques require only a single developer rather than a team of coders and designers working for months.

What will it take for people to rid themselves of Facebook apps and services? Being repeatedly victimized has not been enough. Is it addiction? Stockholm syndrome? In this case, Facebook said they stored millions of IG passwords in plaintext. This article shows you how to download your Facebook data and delete your Facebook account. It feels good.

4. Delete These Sketchy Android Apps That Are Tracking You Without Permission (Lifehacker)

Some top Android apps on the Google Play Store reportedly collected and stored unencrypted data, and stored it without permission. Making it worse, the app developers are Chinese companies who may share the information with their government. Lifehacker lists the apps in their article and suggests deleting them right away.

6. Which organizations place a premium on security and privacy? (Help Net Security)

In the 10th annual audit of 1200 mostly consumer-facing websites, 70% of them qualified for the 2018 Online Trust Audit and Honor Roll. That number was up from 52% in 2017. Improvements in both email authentication and web session encryption drove the increase. One of the largest increases came from Federal government sites which moved from 39% in 2017 to 91% in 2018.