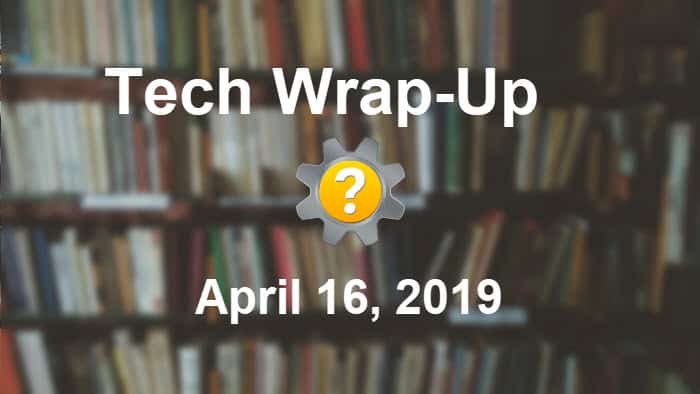 Tech Wrap-Up 4-16-2019. Today is National Librarian Day. Visit a library soon to borrow a book, ask a librarian for help with information and literacy, and to see how this ancient profession has evolved. Tech Help Knowledgebase wraps up each day with a summary of today’s most engaging stories from our social media feeds. We order the story summaries below by user engagement (posts with the most likes, shares, clicks, hashtag clicks and detail expands) and by the number of impressions they received. Stories are in descending order with the most engaging story at the top. Our human-curated social media feeds include links to technology news, how-to and help articles, and video tutorials for common issues.

Yesterday, Google clarified some of its Android developer rules as well as how it reviews non-compliant apps. Part of the clarification involves better email communication and a faster, more personalized appeals process. Google also said they will take more time to review apps submitted by developers who don’t have a significant history.

2. Disable Internet Explorer on Windows 10 if you’re not using it (Tech Help Knowledgebase)

A JavaScript function call can exploit an Internet Explorer (IE) zero-day vulnerability, a security researcher revealed this week. If an attacker adds such a call to an MHT file and sends it to a victim, the file type opens in IE by default. End users may wish to change the default MHT file association to another application, or disable Internet Explorer so it won’t launch

3. Adblock Plus Exploit Can Let Hackers Read Your Gmail (Forbes)

With more than 10 million users, Adblock Plus blocks ads for a lot of users in all the major web browsers. An insert lists flaw could allow an attacker to insert malicious code into Gmail, Google Images and Google Maps. A recently-introduced advertising filtering list feature in AdBlock Plus could allow the execution of malicious code under the right conditions. Although the risk of attack is low, it is still possible. The article suggests AdBlock Plus users “stick to the default filter list” to minimize risk until the next release.

Is it possible that Google boosted Chrome web browser’s adoption by sabotaging Firefox over the years? That is an assertion by Johnathan Nightingale, a former VP of Firefox at Mozilla. Referring to the issues as “oopses,” Nightingale says there were dozens or hundreds of Chrome-related accidents that impacted Firefox users.

We live in the age of $1000+ smartphones. It looks like Google may introduce a more scaled-back version of its Pixel 3 phone without the premium price point. Known at the moment as the Pixel 3a and Pixel 3a XL, the new Pixel might have OLED displays, Snapdragon 670 chips, 4 gigs of RAM, and a headphone jack. Keep an eye out for an announcement at the Google I/O 2019 event coming up next month.