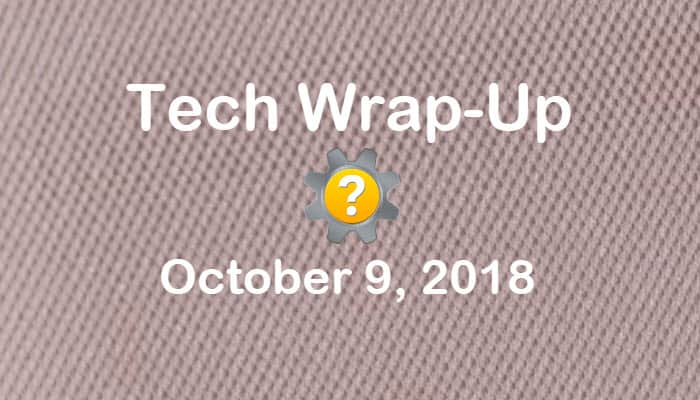 Tech Wrap-Up 10-9-2018, on Made by Google event day. Wrapping up the day with a summary of today’s most engaging stories from the Tech Help Knowledgebase social media feeds. We order the story summaries below by user engagement (posts with the most likes, shares, clicks, hashtag clicks and detail expands) and by the number of impressions they received. Stories are in descending order with the most engaging story at the top. Our human-curated social media feeds include links to technology news, how-to and help articles, and video tutorials for common issues.

1. How the Google Pixel 3 stacks up against the iPhone XS and Galaxy S9 (The Verge)

Google held its Made by Google Pixel 3 event today in New York City. The Pixel 3 release offers an opportunity to compare the flagship smartphones from Apple, Samsung, and Google side-by-side. See how each phone stacks up on size, resolution, processor, RAM, storage, cameras, and more in the handy comparison chart. Does one rise to the top for you?

Civil is a blockchain journalism network built by top journalists and technologists. The network is really an ecosystem where users read published articles. A new economy is born where journalists exchange content with users on a peer-to-peer basis and users directly support their work. Forbes plans to publish metadata to the Civil blockchain in the first quarter of 2019.

3. First it came for your desktop, now Windows 10 1809 is coming for your Things (The Register)

The Windows 10 IoT team announced this past week its direction going forward with the release of Windows 10 October 2018 Update. The update “brings edge intelligence with machine learning, industrial strength security, diverse silicon options and new monetization models for distributors and resellers.” Windows 10 IoT offers two support channels: a Semi-Annual Channel and a Long-Term Servicing Channel, each with its own unique characteristics.

4. Why Bitcoin Is Struggling to Become a Mainstream Currency (PC Magazine)

Bitcoin’s origins directly stem from the financial crisis of 2008. 10 years later, barriers to entry exist that prevent BTC from becoming the envisioned world currency of sorts. Barriers include the complexities of downloading and installing a digital wallet, keeping private keys protected from theft, and having it be a familiar user experience. Price volatility might also keep prospective users at bay.

Not much time has passed since Apple’s big iPhone XS exposé. Yet another Apple event looks imminent as new iPad Pro rumors slosh around the internet. Rumor has it that the next iPad Pro model will feature an edge-to-edge display, and something called flexible Face ID. Flexible Face ID, if true, lets users unlock their iPad from either landscape or portrait orientation.

First Microsoft released Windows 10 October 2018 Update. Then Microsoft rolled back the update due to issues that caused end-user file deletion. Insiders claim they reported the issue in the beta version, but the issue was not fixed in production. Skittish Windows 10 users may become complacent with update installations if the botches continue.

7. Check shortened URLs for safety before you click them (Tech Help KB)