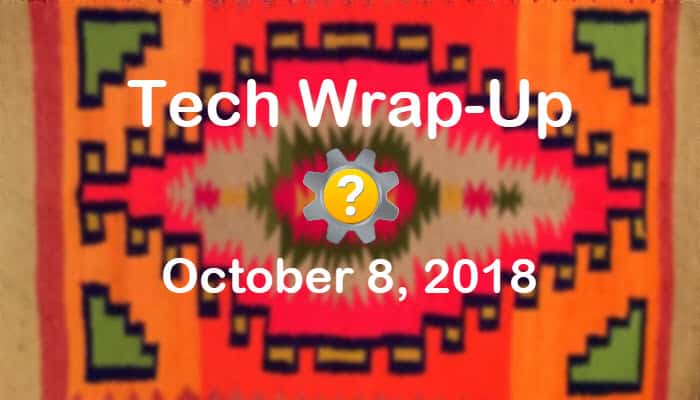 Tech Wrap-Up 10-8-2018, which is Indigenous Peoples’ Day. Wrapping up the day with a summary of today’s most engaging stories from the Tech Help Knowledgebase social media feeds. We order the story summaries below by user engagement (posts with the most likes, shares, clicks, hashtag clicks and detail expands) and by the number of impressions they received. Stories are in descending order with the most engaging story at the top. Our human-curated social media feeds include links to technology news, how-to and help articles, and video tutorials for common issues.

1. 5 router security settings to turn on before it’s too late (Kim Komando)

You may think of your fancy smart TV, digital assistant, and laptop as essential components of your digital life at home. They may have cute nicknames, and you may keep them updated more than your therapist for security and privacy purposes. But they all connect to the internet using a router that you may not even own. It’s that black plastic dusty thing in the corner that blinks at you in Morse code. Your digital world revolves around your router. This piece suggests 5 security settings to check on your core routing device to better protect smarty, digger, and lappy from intrusion.

The much-anticipated Made by Google event is tomorrow in New York City. A lot of leaked information over the past month might take some of the wind out of Google’s sails. Even Google poked a little fun at itself over the leaks. Hopefully, there are some good announcements anyway. The rumor mill says we’ll see a Pixel 3 and Pixel 3 XL, a Chrome OS tablet called Slate, a new Chromecast, and more. According to Google, there won’t be a Pixel Watch this time around.

As of today, pre-orders are open to interested parties for Intel’s new i9 processors. The release date is October 19. The price range is dramatic — from $262 to $1979. Of particular note is that these i9 processors are the first desktop processors to offer hardware fixes for Spectre and Meltdown vulnerabilities.

5. With Chrome 70, hundreds of popular websites are about to break (TechCrunch)

A rude but not wholly unexpected awakening comes to Chrome browser users later this month. On or around October 16, Chrome will block sites that use old Symantec HTTPS certificates (certs issued before June 2016). According to the article, a researcher determined that 1,139 websites in the top one million sites still used a cert that is old enough for blocking.

Do you want the good news or the bad news first? The bad news is the Windows 10 October 2018 Update deleted some files from your computer. The good news is Microsoft can recover them. The article says that Microsoft’s customer support uses Windows’ System Restore feature to backtrack to a good restore point. If that does not work, they try an NTFS file system recovery process.

7. There’s never been a better time to switch from a Mac to Windows (Quartz)

Apple’s computer market share has stayed at a flat 6ish% to 8ish% over the past few years. For those Mac users who feel alienated or disgruntled with Cupertino’s design decisions, many non-Mac choices exist from which to initiate your move away from the Apple ecosystem. If you do, this piece from Quartz tells you about some of the primary usability differences.