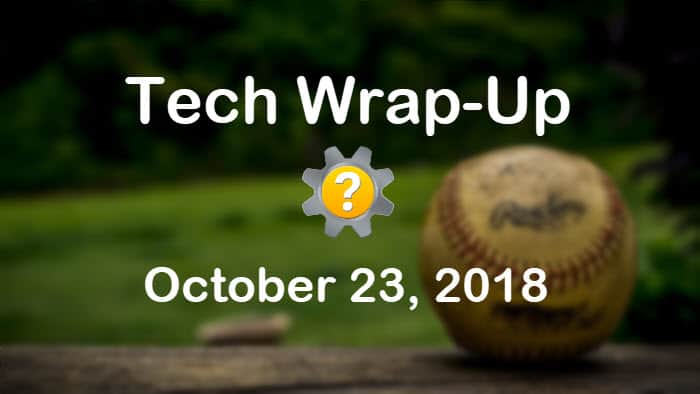 Tech Wrap-Up 10-23-2018. The 2018 World Series baseball championship begins tonight in Boston between the Boston Red Sox and Los Angeles Dodgers. We wrap up each day with a summary of today’s most engaging stories from the Tech Help Knowledgebase social media feeds. We order the story summaries below by user engagement (posts with the most likes, shares, clicks, hashtag clicks and detail expands) and by the number of impressions they received. Stories are in descending order with the most engaging story at the top. Our human-curated social media feeds include links to technology news, how-to and help articles, and video tutorials for common issues.

Stories curated for our feeds are from our staff writers or culled from third-party sources that produce content related to the categories covered by our site. See the summaries and links below for today’s top stories by user engagement. Follow us on Twitter, Facebook, Google+ and YouTube to interact with our feeds.

Nintendo is teaming up with the Institute of Play to bring STEAM education to 2000 elementary school students this school year. The project aims to deliver 100 Nintendo Labo cardboard gaming kits to 100 New York City area schools. The students will discover the basics of science, technology, engineering, art and mathematics using Nintendo Labo.

A bi-annual Piper Jaffray survey of 8600 teens from 46 states found that 82% of them own an iPhone. 86% of the teens surveyed said their next phone would be an iPhone too, the highest number the survey has ever seen. By contrast, only 10% of teens said their next phone would run Android. Apple’s favorable numbers in the survey have steadily increased over the last 5 years.

The world awaits the debut of Pixel Slate, Google’s new tablet, next month. In preparation for its release, Chrome OS and Google Assistant improvements are making the rounds, including those that are part of Android Pie. Devices running the Chrome OS Canary channel are first to see Android Pie for Chrome OS.

4. A new bug in the Windows 10 October 2018 Update could delete your files (Digital Trends)

It’s not deja vu. In an aborted push of Windows 10 October 2018 Update a couple of weeks ago, users reported file deletion issues. The latest push threatens zip files in particular, including the possibility of overwriting files. It is important to note that the issue impacts only the native Windows 10 file decompression feature and not third-party applications.

5. The 7 deadly sins of email security (The Next Web)

This article presents some interesting statistics right off the bat. For example, one in 100 emails is a disguised hacking attempt. People send more than 205 billion emails each day. As stated, email was never intended to be a secure form of communication. Some of the “deadly sins” are that email has a high potential to compromise a business, it is hard to control email coming from outside of a business, it has weak auditability, potentially weak passwords, and it is easy to send email to a wrong address.

Oracle today announced four new blockchain applications at Oracle OpenWorld. In one case, Intelligent Cold Chain, which is a supply chain tracking capability, tracks the temperature of a product to ensure it remained within its temperature range while in transit.