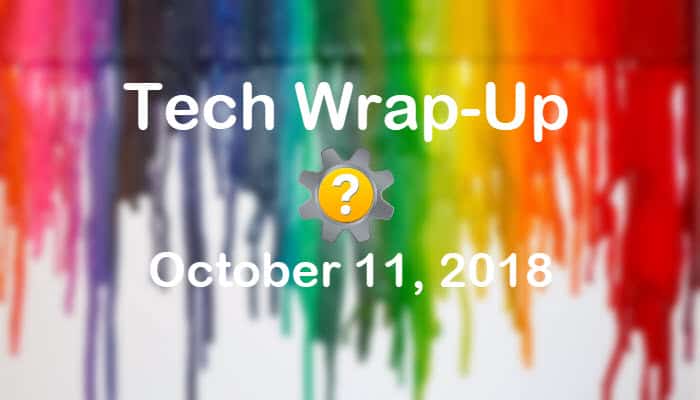 Tech Wrap-Up 10-11-2018, which is National Coming Out Day. Wrapping up the day with a summary of today’s most engaging stories from the Tech Help Knowledgebase social media feeds. We order the story summaries below by user engagement (posts with the most likes, shares, clicks, hashtag clicks and detail expands) and by the number of impressions they received. Stories are in descending order with the most engaging story at the top. Our human-curated social media feeds include links to technology news, how-to and help articles, and video tutorials for common issues.

After conducting studies about gesture navigation in Android Pie, Google determined that users like it. So they made it not the default navigation option for the Pixel 3 and Pixel 3 XL smartphones but the exclusive option. According to a Made by Google tweet, the change “will represent navigation on all Android phones going forward.”

The default web browser on Windows 10 is Microsoft Edge. An Edge app for iOS exists, and Microsoft just released an update to it for insiders only. Insiders who access the Edge release will notice new features like support for Siri shortcuts, availability on the widget screen, and support for bottom bar quick actions.

3. Why tech companies need to reinvent themselves every three to four years (Recode)

If it isn’t broken, don’t fix it. That’s the adage at any rate but may not carry the same weight these days. A former Cisco CEO says it’s dangerous for companies to do the same thing for too long. Doing so could risk disruption by a rival. This piece from Recode is a full transcript of a conversation between Kara Swisher and former CEO John Chambers.

It was a long time coming. Microsoft, founded in 1975, made the Top 5 PC sellers list for the first time in its 43-year history. HP, Lenovo, Apple, and Dell rounded out the list. Although first and foremost a software maker and cloud provider, the Surface line of tablets and laptops boosted Microsoft’s secondary hardware business in the third quarter of 2018. They’re still a great distance from making the top 4.

It took 7 years for DuckDuckGo to reach 10 million daily searches, then two more years to double that number. DuckDuckGo tweeted today that they reached 30 million searches in only half a year this time. Growth is rapid but the numbers pale by comparison to Google’s who sees over 3 billion daily searches. Europe’s GDPR likely helped give them the boost.

In the wake of serious roll-out issues with Windows 10 October 2018 Update, it may be time for Microsoft to return its focus to reliability. ZDNet thinks that Windows as a service is not working and that Microsoft has lost control of its update strategy. The article also notes that Microsoft laid off some Windows testers back in 2014, which may account for some of the recent issues.