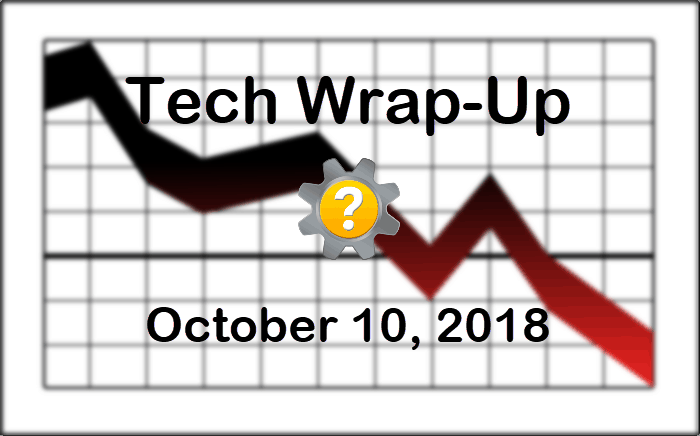 Tech Wrap-Up 10-10-2018, the day the Dow Jones Industrial Average plunged more than 800 points. Wrapping up the day with a summary of today’s most engaging stories from the Tech Help Knowledgebase social media feeds. We order the story summaries below by user engagement (posts with the most likes, shares, clicks, hashtag clicks and detail expands) and by the number of impressions they received. Stories are in descending order with the most engaging story at the top. Our human-curated social media feeds include links to technology news, how-to and help articles, and video tutorials for common issues.

The idea behind Liquid saw first light in 2015. Bitcoin’s first sidechain of sorts opened for real transactions today. Using Liquid initially are 23 bitcoin exchanges, brokers and other institutions for sending fast, secure, and confidential transactions. These entities comprise 50-60% of all bitcoin transactions. Liquid is a federated sidechain as opposed to a real sidechain, so it relies on the entities to manage it together.

Google’s Project Zero put Apple’s Safari web browser updates and flaws under its scrutiny last year. When it compared last year’s results a year later, Project Zero found progress with Safari fixes, but not at a sufficient rate. Further, Project Zero claims that when Apple fixes security issues, they edit previously released notes on the updates once the issues are fixed to acknowledge their existence.

4. Google Chromecast gets better, but it cannot compete with Roku and Amazon 4K devices (BetaNews)

Google released a new Chromecast version this week. It’s still a round, plastic dongle that users insert into their TV’s spare HDMI port to stream content from a phone. The $35 price is also the same, but the inside is different, boasting a processor that is 15% faster than the previous model. In addition, Chromecast 3rd Generation supports 5GHz 802.11ac Wi-Fi but still doesn’t support 4K.

Another day, another security flaw with one of the world’s most popular apps. The flaw plaguing WhatsApp could crash your phone, then leave it vulnerable to attack. Fortunately, a fix is available so make sure you’re using the latest WhatsApp version.

6. A Major Scientific Project Aims to Find Out Exactly How the Internet Is Screwing With Your Brain (Gizmodo)

You may feel it every day as you stare for hours on end at an internet-connected device — some relationship between your online activity and your state of mental health and well-being. A group of researchers called the European Problematic Use of the Internet (EU-PUI) Research Network wants to know more about what harm it may be having. The network has so far recruited 120 scientists from 38 countries and received 520,000 euros from the European Union.

7. Android creator wants Essential’s new phone to text and email for you (Engadget)

Say “Essential Android AI” ten times fast. The co-founder of Essential Products and co-creator of Android wants your Essential smartphone to use artificial intelligence (AI) to send email and text messages on your behalf. The idea is unique in the marketplace. Helping users with smartphone addiction is a driving force behind using the technology this way.